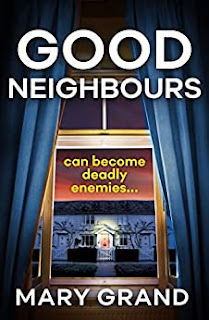 I'm thrilled to welcome fellow Boldwood Books author, Mary Grand, to the guest blog today, to chat about coercive relationships and how they feature in her gripping mystery; Good Neighbours.
Good Neighbours is, at heart, a murder mystery, a whodunnit. It also explores the complex and disturbing relationship between Nia and her husband, Chris.

Nia is the central character in Good Neighbours. She has been persuaded to come to stay in her aunt’s vacant home on the Isle of Wight, in order to give herself ‘space’ as she has reached a crisis point in her marriage. The house is in a small close in the harbour town of Yarmouth.
Nia’s husband, Chris, of twenty years, is the charismatic headteacher of a successful High School. Chris has slowly eroded Nia’s sense of self-belief to such an extent that she no longer trusts herself to make even quite trivial decisions, such as what to wear.

Prior to her arrival on the island, Nia had begun to suspect her husband was having an affair. He persuaded her she was imagining things, was overreacting and unwell. Nia became so distraught that she gave up her work as a hairdresser, has become increasingly isolated from friends, and seldom leaves the house. Chris surprises Nia by persuading her to go and stay in her aunt’s house for a short time (his motives soon become clear). Nia arrives on the island with very low feelings of self-worth, pretty much convinced she is losing her mind.

Nia is soon befriended by Jade who owns a salon in the close. Jade’s sister, Ruby, is tragically found dead on the beach, and it soon becomes clear that Ruby’s death was not accidental. Jade asks Nia to help her investigate the death of her sister. To help Jade, Nia reluctantly starts working in the salon. Here she re-discovers her love and skill as a hairdresser.  This experience, combined with her friendship with Jade, helps Nia to start to question Chris’s behaviour towards her and she starts to slowly regain some sense of self and self-belief.Things come to a head when Chris visits the island. He can see the change in Nia, realises he is losing control of her and insists she returns with him.  Nia manages to resist and stays. Although her husband appears to accept her decision, he continues in other ways continues to try and manipulate and control her.Nia’s journey of healing is not easy. One of the significant turning points for her is when Jade helps her see that she is actually a victim of a form of emotional abuse known as gaslighting by her husband.

The term gaslighting originates from a 1940s film, ‘Gaslight’ in which a naive, sweet young woman named Paula marries the dashing, Gregory. His aim is to convince her she is going insane. Among many other things, he secretly interferes with the gas lamps. Paula is frightened by them fading when she is alone, but he convinces her she isimagining it. He set up situations to convince her she is becoming forgetful and fitful. He confines her to the house and tells everyone she’s not well. (A police officer becomes involved...but I won’t spoil the ending!)

After Chris’s visit, Nia starts to recognise the signs of gaslighting in her marriage and knows she now has to find a way to re-discover her sense of self-belief and self-worth, and how to love and trust herself again.In Good Neighbours, you can read what decisions she makes (and also discover if she finds the killer of Jade’s sister Ruby!).

In need of an escape from her failing marriage, Nia agrees to house-sit her aunt’s cottage on the Isle of Wight. She feels sure the cosy close in a quaint harbour town will be a safe place to hide and figure out what to do next.

But things are not all as they seem in the close, and the neighbours who welcome her with open arms, are keeping secrets. When Nia finds the body of one of her new friends lying on the beach, she feels sickeningly sure that the killer is dangerously near to home. 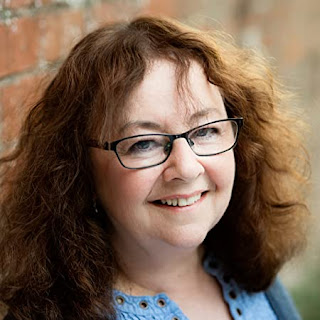 Who killed her friend and why did she have to die? And if Nia discovers the answers she’s looking for, is she next on their hit list? Good neighbours may become good friends, but they can also make deadly enemies…

Mary Grand has written six novels and two anthologies of short stories. Since writing for Boldwood Books she has written three murder mysteries, The House Party, The Island and Good Neighbours. These are all gripping, page-turning suspense novels, with a dark and often murderous underside, set on the Isle of Wight. She grew up in Wales, was for many years a teacher of deaf children and now lives on the Isle of Wight.Book Linkhttps://amzn.to/35WhGbG