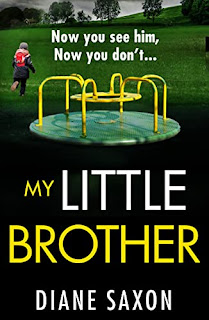 I don’t write characters. Characters come to me warts and all, and yes, this may sound mad to some, but many writers will tell you the same thing.

I’m not a plotter and I don’t sit for hours wracking my brains over how I can squeeze in a character with specific issues. These characters are normally already fully rounded and personal to me.

Research has always been a key factor in any of the characters I write whether this is their job, their hobby, their habits, behaviour etc. I don’t mean by reading the NHS guidelines on what a particular definition is, but I speak with people who have a relationship or indeed are the person with special characteristics. Most the time I write with confidence as I normally have a certain personal knowledge too.

When I first started to write My Little Brother, it was from a memory of childhood.

I was late home from school with my friend. My bike had a puncture and I had to walk it home. My friend left me on a dark, rainy winter’s night. I recall the terror of being left alone. The worry that I was also in trouble for being late. As a ten-year-old we still have monsters lurking in the shadows.

That little girl wasn’t responsible for me. But I never forgave her for deserting me. You see, I’m a fight, not a flight person. I know what decision I would have made if the roles had been reversed.

But that’s not the norm. I know that. What she did, was what most children would do.

It got me thinking, though. What if it was a child who was supposed to be responsible for another, less able child. Younger. Vulnerable.

So Lloyd came to me with autism. Something I do have personal family knowledge of. But autism is such a huge spectrum, I needed to concentrate it, narrow it down because the children I’ve known with autism have brilliant minds. I wanted to show that. This little six-year-old boy with such strong emotions that he couldn’t cope and with a family who struggled to understand.

My Little Brother is set in the present, and the past. Twenty years ago very few children were properly diagnosed with autism. They were naughty children. Disruptive. Lack of parental control. Too many colourings, not enough discipline.

Autism is still very difficult to diagnose and comes under such a huge umbrella. It can be easily mistaken for other issues. Some families recognise it themselves, others only realise when they are struggling to cope.

I hope Lloyd touches people’s hearts as he did mine. I haven’t written him as stereotypical, I’ve written him as I know him. An intelligent mind, a beautiful heart all wrapped in an exploding confusion of emotion.

My Little Brother – the Blurb

It was an ordinary school day, the day I lost my little brother.

One moment he was on the roundabout and then was gone. Gone. Missing.

They all blamed me. I was in charge. Even though I was only ten years old.

They sent me away. The hurt, the shame, the questions. The not knowing.

I tried to move on.

It’s been twenty years in exile and now somebody wants me back.

Someone with a dark secret. They hold the keys, they know the truth.

So, I need to return to the Welsh village of my childhood to find out who, because I have a secret,

I did something bad.

Available in all bookstores from 11th July 2022