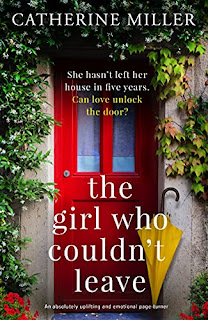 The original title for The Girl Who Couldn’t Leave was Six Yards from Home. I wanted to create a love story for someone who was unable to leave their house beyond their own front garden. Having a close friend with agoraphobia, I wanted to see this in fiction.

Because of something that happened to her, Fiona becomes reluctant to leave the house, even to go out for medical appointments. It takes someone coming in to start opening up her world again. A neighbour, Bethany, is desperate for child care and asks Fiona to help. She does so last minute and it starts to become a more regular arrangement.

Even though I’d submitted the idea prior to any lockdowns, I was writing it having been asked to isolate as one of those classed as extremely clinically vulnerable. It gave me an insight I’d never previously had as to how difficult that existence could be in terms of logistics.

I had my friend with agoraphobia read the manuscript early to make sure that I’d dealt with that aspect sensitively. As I often deal with elements of physical or mental health in my books, it’s important to me that I get those parts right. I think I have with The Girl Who Couldn’t Leave as I’ve had messages to that effect.

My favourite part of writing that book was how Fiona had become a character confined by four walls. This didn’t make her an uninteresting character at all. If anything, she’s more interesting because of it and a favourite amongst the many that feature in my books.

When Catherine Miller became a mum to twins, she decided her hands weren’t full enough so wrote a novel with every spare moment she managed to find. By the time the twins were two, Catherine had a two-book deal with Carina UK. There is a possibility she has aged remarkably in that time. Her debut novel, Waiting For You, came out in March 2016.

Catherine was a NHS physiotherapist, but for health reasons (Uveitis and Sarcoidosis) she retired early from this career. As she loved her physiotherapy job, she decided if she couldn’t do that she would pursue her writing dream. It took a few years and a couple of babies, but in 2015 she won the Katie Fforde bursary, was a finalist in the London Book Fair Write Stuff Competition and highly commended in Woman magazine’s writing competition. Soon afterwards she signed with Carina. Soon after that, she collapsed in a heap and was eventually revived by chocolate.

Since then she’s become an internationally bestselling novelist and hasn’t found a week that didn’t require revival by chocolate. She is one eighth of The Romaniacs – a group of writing friends who’ve supported each other since meeting through The Romantic Novelists’ Association’s New Writers’ Scheme

She hasn’t left her house in five years. Can love unlock the door?

Five years ago, something happened that changed Fiona forever. Now she is too afraid to walk beyond her front gate.

It’s not the life Fiona had dreamed of but she has made it work, finding happiness in the safe routine of her days. On Mondays she treats herself to a glass of Chardonnay. On Tuesdays she has a working lunch at her desk (usually peanut butter on toast). On Wednesdays and Thursdays, she alternates spinning classes in her shed with yoga in the garden. Saturdays are for tidying up and Sundays are for relaxing in her favourite armchair.

But today is different. Today, her perfectly planned Monday is suddenly interrupt
ed by a knock at the door and a stranger on the other side. Someone who could change everything.

Now Fiona is faced with an impossible choice. Is she brave enough to open the door? And if she does, will it set her free from her past or close her off from the world forever?

The perfect hopeful and heart-warming read we all need! It reminds us that life continues no matter where we are, and that living is all about finding someone to share the journey with. Fans of Jojo Moyes, Jodi Picoult and Diane Chamberlain will love this emotional and uplifting story.